The following page contains details concerning the FMA’s organizational structure, information about the Executive Board and Supervisory Board as well as the Rules of Procedure.

The FMA’s Executive Board, Mr. Helmut Ettl and Mr. Eduard Müller, manages the service operation and lead business in accordance with the Authority’s legal basis and the Rules of Procedure. 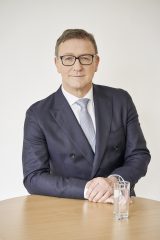 Helmut Ettl was born on August 23, 1965 studied Economics at the Johannes Kepler University in Linz. After completing his alternative service, he worked in various managerial positions for the City of Linz child-welfare services. In 1995, he moved to Vienna and joined the Foreign Research Division of the Oesterreichische Nationalbank (OeNB), his thematic focus being on economic and monetary union. In 2001, he was appointed deputy head of the Banking Analysis and Inspections Division and became its head in 2003. In 2008, Helmut Ettl was appointed as FMA Executive Director. Since 2011 he has been a member of the Board of Supervisors of the European Banking Authority (EBA) and European Systemic Risk Board (ESRB). Between 2008 and 2010 Helmut Ettl was a member of the Committee of European Banking Supervisors (CEBS). His current term as FMA Executive Director runs until 14 February 2023. Since January 2014 Helmut Ettl has been a voting member of the Supervisory Board of the Single Supervisory Mechanism of the European Central Bank (ECB). From April 1, 2019 to March 31, 2020, he was a member of the “Steering Committee” (SC) of the Supervisory Mechanism (SSM) for European banking supervision. Since 2021 he is a Member of the European Banking Authority’s (EBA) Management Board. 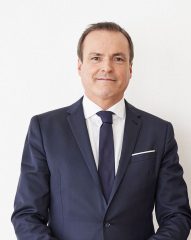 Eduard Müller has been Executive Director at the FMA since February 2020. In this function, since September 2020 he is a Member of the Board of Supervisors of the European Securities and Markets Authority (ESMA) as well as a Member of the Single Resolution Board (SRB). In May 2022 he was also elected to the Management Board of ESMA. Prior to assuming his position at the FMA, worked at the Federal Ministry of Finance and the European Commission. In 2013, he was appointed General Manager of the Linde Verlag publishing house, before returning to the Federal Ministry of Finance in 2015 as Head of Section. Between June 2019 and January 2020, he served as Federal Minister of Finance as well as Minister for the Civil Service and Sport. He holds a graduate degree in Economics and a postgraduate MBA.

The FMA is divided into six departments:

The two staff divisions “Enforcement and Law” and “Internal Audit” report directly to the Executive Board.

Article 1. The Rules of Procedure of the FMA shall govern:

(2) the FMA’s regulation on representation.

The FMA’s Rules of Procedure of the FMA are available in in German.

Composition of the Supervisory Board