Old-age provision is based on a three-pillar model in Austria. Statutory pensions (the first pillar) ensure a minimum level of financial security. Occupational and private old-age pensions (the second and third pillars) should guarantee that it is possible to maintain a standard of living. 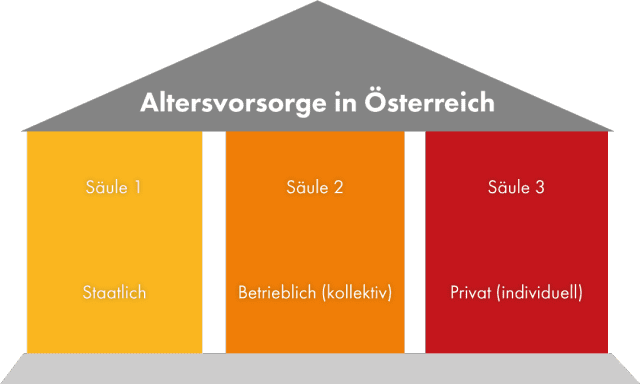 Up until 1990 occupational retirement provision (ORP) was primarily based on “direct commitments” by the employer. Such commitments (frequently referred to as firm or company pensions) were financed by the pensions provisions in the company and the pension benefit was therefore entirely linked to the fate of the company. In 1990, a new legal framework for occupational retirement provision was created following the entry into force of the Company Pension Act (BPG) and the Pensionskassen Act (PKG). The BPG defines the coverage (under employment law) of benefits and entitlements arising from commitments from company pensions, which are made by the employer to the employee by way of an employment relationship under private law.
ORP primarily covers all benefits in relation to old-age, invalidity, or survivor’s pensions, which an employer provides for its employees and their spouses and partners.
The Pensionskassen are the more significant way of implementing ORP. It is a collective provision system. The employer concludes a contract with a Pensionskasse, and all affected employees are included in this occupational provision. From the contributions that are paid in, capital is accrued, which when the benefit event occurs are annuitised and paid out as an old age, survivor’s or occupational disability or invalidity pension.